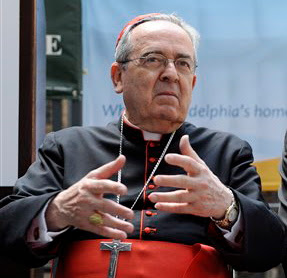 After the Archdiocese of Philadelphia announced that 21 priests had been placed on administrative leave, a prosecutor praised the move, while groups representing sex-abuse victims said the move was not enough.

“Cardinal Rigali’s actions.. reflect his concern for the physical and spiritual well-being of those in his care,” said Seth Williams, the district attorney who had guided a grand jury investigation that concluded with a scathing critique of archdiocesan policies.

But Joelle Casteix of the Survivor’s Network of Those Abused by Priests (SNAP) disagreed, saying that cardinal’s action was “outrageously reckless and callous” because the archdiocese had not immediately identified the 21 priests who were removed from ministry. In fact, the archdiocese plans to reveal the identity of the suspended clerics, beginning with disclosures at their parishes this weekend.

The simultaneous removal of 21 priests, coming in the wake of the critical grand-jury report, clearly indicated that the archdiocese was backpedaling in the face of public outrage. Terence McKiernan of BishopAccountability.org described the mass suspensions as “an act of desperation, not transparency.”

UPDATE:   The list of names is out and can be viewed here.

When Sue Walker’s dad died in January, she immediately began planning his services — for July. To honor her father… Walker and far-flung family members will play some golf and cards, drink some scotch and “call it a day,” she said. “If we can have everybody here and do something he loved, it will be more of a tribute,” Walker said.

Although some funeral experts suggest immediate services to help in the grieving process, more families are waiting weeks or even months to hold memorials…

“Each circumstance is different,” said Daniel McGraw of Gill Brothers Chapels. “My neighbor’s mom just died and they just don’t want to go out to the cemetery until the spring. … Sometimes they don’t want to pull the kids out of school or they have a long-planned vacation to Mexico and they don’t want to lose the $1,000 they already paid for the trip.”

In a few cases, people just have difficulty finding an open date in their hectic schedules.

“It’s sad but true,” McGraw said. “A lot of people’s lives are busy, and they’re postponing funerals for convenience’s sake. It’s a sign of the times.”…

Another trend in faithless, selfish and degenerate times yes…

At least 10 Coptic Christians were shot dead and 110 wounded by gunfire in religious clashes with Muslims in Cairo.

When will it end?!

The clashes between Christians and Muslims erupted in the poor working class district of Moqattam midafternoon Tuesday when at least 1,000 Christians gathered there to protest the burning of a church last week.

Fighting broke out when dozens of Muslims showed up in Moqattam, inhabited by Copts who work as refuse collectors and who had blocked a main north-south artery in the capital.

People threw rocks from both sides and witnesses said soldiers at the scene fired shots into the air in a bid to disperse the crowds.

Christians, who make up about 10 per cent of Egypt’s 80 million population, complain of systematic discrimination and have been the target of several sectarian attacks.

Ahead of the incident in Moqattam, Copts had protested in central Cairo against the burning of a church south of the capital after deadly clashes between Christians and Muslims.

The protest outside the radio and television building came a day after at least 2,000 angry Christians demanded that the torched church be rebuilt, and that those responsible be brought to justice.

The Shahedain (Two Martyrs) church, in the Helwan provincial town of Sol, was set ablaze on Friday after clashes between Copts and Muslims that left two people dead.

The violence was triggered by a feud between two families, which disapproved of a romantic relationship between a Christian man and a Muslim woman in Sol…

The Telegraph (UK) has the rest of the report.

Almost 20 years in the making, a revised Old Testament uses updated language to get readers closer to the ancient texts.

The New American Bible Revised Edition (NABRE) released on Ash Wednesday provides Catholics with a new translation of Scripture that is more faithful to the original texts than previous versions. But will they embrace the idiomatic English and fresh but unfamiliar renderings of many of the Bible’s most famous passages?

“One of the major goals,” said Robert Di Vito, a key editor of the project and an associate professor of theology at Loyola University Chicago, where he specializes in the Old Testament and Northwest Semitic philology, the linguistics of ancient biblical languages including Hebrew and Aramaic, “was to have a translation that uses colloquial and contemporary American English.”

But updating the language wasn’t the only motivation. Advances in the fields of archaeology, biblical studies and textual analysis made a new rendering of the Old Testament from the New American Bible’s 1970 first edition almost mandatory. “We’ve had 40 years of scholarship on the Dead Sea Scrolls to help improve the accuracy of the texts,” said Di Vito.

The New Testament remains unchanged, though the Psalter appears in its third edition, newly reworked from a 1991 translation that stirred controversy at the time.

This new version of the Bible, approved for personal and scholarly use but not affecting the readings used at Mass, was two decades in the making…

A major concern with any recent translation of Scripture is always how “inclusive language” — language tailored so as not to offend a particular group, most often women — is employed…

“We did try to make [this translation] inclusive to the extent that we could within the guidelines of Rome,” said Benedictine Father Joseph Jensen, a NABRE editor. As executive secretary of the Catholic Biblical Association, Jensen signed a letter critical of Liturgiam Authenticam, a Vatican instruction on translating the liturgy into the vernacular…

While all these concerns are important, the average Catholic is more likely to ask simpler questions: Do I like this new translation? Does it read well?

Got to get my hands on one! (Sometime…)

I mentioned the release before here.

A moving read on this, Ash Wednesday.

And why not? T

hey are systematically abandoning the Church’s apostolic teachings on every interval anyway.

Canadian Anglicans will hold discussions this spring about whether baptism is necessary for taking part in communion — questioning a requirement of Christianity that has existed for 2,000 years.

“Official teaching is you have to be baptized first. But a number of clergy across the country feel strongly about this as an issue and many have approached their bishops about allowing for an ‘open table’ in which all could take communion,” said Archdeacon Paul Feheley, who is the principal secretary to Archbishop Fred Hiltz, head of the Anglican Church of Canada.

It will be discussed when the House of Bishops meet in April, but not as an official topic, he said.

The idea — already rejected as a dangerous step by more orthodox Anglicans — was raised in an article this week in the AnglicanJournal.com in which an Ontario church pastor argues that removing the requirement of baptism would help stop the decline in the number of Anglicans attending services.

Herein is the continual cause of demise within Anglicanism: Compromising to be relevant, watering down doctrine to be popular, and appease the mind of depraved man in a pathetic attempt to halt dwindling Church attendance levels. Why not just simply be FAITHFUL?! That way you actually get stronger Christians – it’s working in so many other Churches – who know what they believe and why, and not some insipid believers who end up drowning on milk for lack of the truth.

… preach the word; be ready in season and out of season; reprove, rebuke, exhort, with great patience and instruction (2 Tim 4:2).

… For this reason reprove them severely so that they may be sound in the faith (Titus 1:13).

Here’s some archaeological news of a different kind:

A bus driver for a construction firm shot six workers dead and wounded six others as he sprayed passengers with gunfire near the Egyptian capital.

A police investigation showed the shooting on Tuesday was due to a row between the driver and some of his colleagues who were excavating near his house looking for antiquities, a security official said.

“Six employees were killed and six others wounded before the other workers were able to overpower [the driver],” provincial governor Fathi Saad said on public television.

The governor said the violence was all the more shocking because the driver had “a good reputation.”

The driver for the company Arab Contractors was taking 22 employees to their workplace in Giza when he stopped the bus at Meniel Shiha, 20 kilometres south of Cairo, and started firing.

Arab Contractors, one of Egypt’s biggest building firms, said the incident took place about 200 metres from one of its sites.

“The passengers were shocked to see driver Mahmud Taha Ahmad Sueilem, 54, pull out an automatic weapon from under his seat and start firing indiscriminately on the passengers,” it said in a statement.

The official, citing the results of a police investigation, said that Salem and other company employee were involved in excavations near the driver’s house in search of antiquities.

“Salem criticised them about this and they made fun of him and threatened him… The bus driver decided to get his revenge and hid an automatic rifle in the bus,” the official said.

Survivors said earlier that the driver, who was arrested by the authorities, had been suffering depression due to a job transfer.