At the start of Lent:

Thousands of Filipinos lined up across a football field in Manila to mark the start of Lent by forming a human cross they hoped would go down as the world’s biggest.

Officials at the University of Santo Tomas, a Catholic university that at 400 years old is the nation’s oldest, said the Ash Wednesday event was also a proclamation of the school’s stand against abortion and a controversial bill on reproductive health currently being debated.

More than 20,000 people, including students, faculty members and university personnel, the students wearing black T-shirts or white school uniforms, stood side by side to form a two-coloured Dominican cross while prayers were recited and songs sung.

“Forming this biggest cross will make people remember that the Lenten season is all about Christ,” said speech pathology student Erika Claire Gomez.

Information about the cross will be sent to Guinness for verification.

In Catholic churches around the country, Filipinos – around 80 per cent of whom are Catholic – observed Ash Wednesday by hearing Mass and having a cross drawn on their foreheads with ashes. Many will fast or make other sacrifices for the 40-day Lenten period. 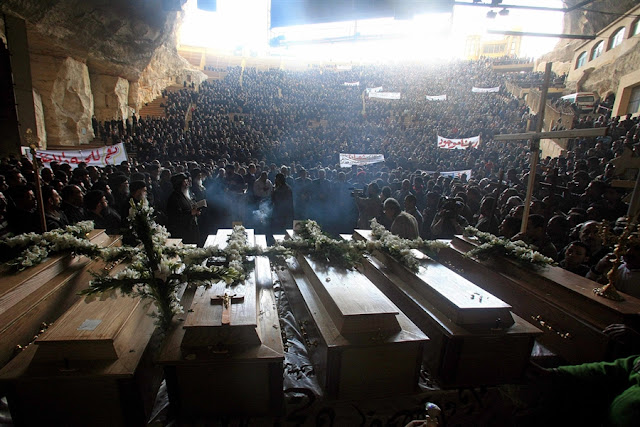 Thousands of Egyptian Christians attended an emotional funeral service on Thursday for people killed in the worst Christian-Muslim violence since Hosni Mubarak was toppled from power.

Six coffins lay by a church altar during the ceremony, victims of the violence on Tuesday in which 13 people were killed and 140 wounded. A seventh coffin arrived later.

The strife poses another challenge to the Supreme Council of the Armed Forces, which says it wants to hold elections within six months so it can relinquish power…

“We will sacrifice our souls and our blood for the cross,” a crowd of mourners chanted at the end of the service as they poured out of the Samaan al-Kharaz Church, built in a cave above the Cairo slum of Manshiet Nasr.

Some held aloft signs with slogans that included: “No to sectarianism, no to murder,” and “Farewell to the martyrs of Christ.”

Yet another assassination attempt on the Ecumenical Patriarch of Constantinople, Bartholomew I, has been prevented:

The Turkish police have prevented another assassination attempt on Ecumenical Patriarch of Constantinople Bartholomew I, according to the Austrian catholic news agency.

The Turkish police have arrested two suspects aged 17-18. The assassination attempt was planned in the Fanar district, where the residence of the Patriarch is located.

According to representative of the department for foreign church relations at the Russian Orthodox Church Igor Yakimchuk, Turkey is a huge country and there are extremists.

Expert of Carnegie Moscow Center, professor Alexey Malashenko believes that, most likely, Islamists are engaged in the assassination attempt, who are much more radical compared to incumbent Prime Minister of Turkey Erdogan.

With respect to the assassination attempt, several Turkish papers referred to a Catholic priest, Armenian journalist Hrant Dink and three protestants, including a German missioner, who were killed by young people aged 16-20, Sedmitsa.ru reported.

Jordanian-financed restoration work is currently underway at the Dome of the Rock and Al-Aqsa mosque in Jerusalem.

The 35-acre compound Muslims know as Haram Al-Sharif, or Noble Sanctuary, is the third holiest site in Islam. Jews refer to the site as the Temple Mount.

Built on the spot where the ancient Jewish Temples once stood, the golden-roofed Dome of the Rock has been a fixture in the city since they were erected 13 centuries ago. Renovators working with the Jordanian-supported Waqf, or Supreme Muslim Council, have erected pipe scaffolding inside the seventh century shrine in order to restore the mosaics on the inside of the dome.

Others carefully vacuum away crumbling walls and work to restore the lintels around the many windows in the edifice. Built in 692 C.E. (A.D.), it is one of the oldest extant Islamic structures standing today. Muslims believe that the prophet Mohammed ascended to heaven from the Foundation Stone inside the magnificent building, which is decorated with blue tiles imported from Turkey.

With thousands of worshipers and visitors passing through this site every day it has suffered wear and tear, not only from time but also from earthquakes and material fatigue. Renovators are in a constant battle to maintain the magnificent structure…