Thanks to those selfish and wicked new atheists:

Complaints by devotees of the new atheism in Australia have beaten back the Lord’s Prayer from the public square. A primary school in Perth’s northern suburbs has ended the reciting of the Lord’s Prayer before school assemblies after some parents complained that it violated the law by promoting religious belief over non-belief.

On 20 September, Edgewater Primary School principal Julie Tombs wrote to parents announcing the cessation of prayers after 25 years, after a survey of parents indicated that some were opposed to the practice.

“We acknowledge that of the parents who did respond to the survey, many wanted to retain the Lord’s Prayer and it is right that we continue to recite it at culturally appropriate times such as Christmas and Easter, as part of our educational programme,” Mrs Tombs said in a statement.

“However, at this school we have students from a range of backgrounds and it is important to consider all views and not promote one set of religious beliefs and practices over another.”

The complaints to the school, which is in an area with few religious minorities, arose from parents who opposed any prayer. While only 36 per cent of the parents responded to the survey and of that group only a minority were opposed to the prayers, Mrs Tombs stated the argument that Western Australia Education Act forbade state schools from fostering sectarian religious creeds.

WA Premier Colin Barnett told the AAP that “WA is basically a Christian-based community and I think its desirable to have the Lord’s Prayer said.”

However, the “decision rests at the school level. Certainly schools can, and I would encourage them to, have the Lord’s Prayer.”

The Very Rev John Shepherd, the Dean of Perth, concurred, saying there was a place for the Lord’s Prayer in a multi-faith environment at government schools.

“I think there is a place [for the Lord’s Prayer], just as there is a place for exposing children to the full knowledge of other faiths,” Dr Shepherd said, adding “it does embody values to which we all ascribe.”

One mother interviewed by Nine News as she picked her children up from school summarized the complaints as being “ridiculous” for giving a vocal minority control over public life.

Well, I don’t stay in Australia, so here it is: 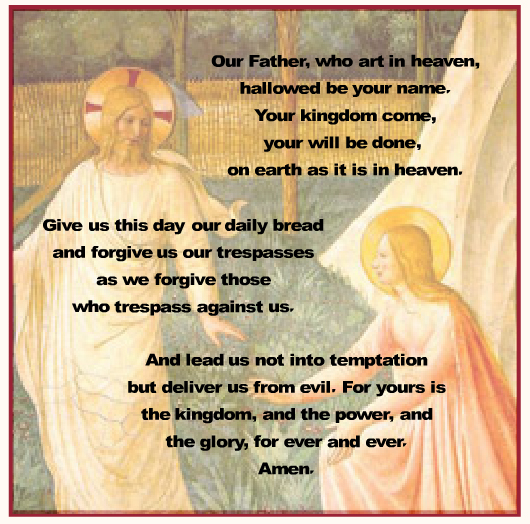 Check it out here. I have neither an iPad nor a Kindle but in the event that there is a more the generous benefactor out there, somewhere, I’ve added both to my Wish List.

The gunman then turned the gun on himself as he knelt before the altar:

Madrid, Spain – A gunman walked into a Catholic church and killed a pregnant woman Thursday, then committed suicide, but emergency crews performed a C-section on the woman inside the church and saved the baby, a police official said.

Another woman sitting near the victim was wounded by a stray bullet in the shooting, which occurred just before a Mass at St. Mary’s Church in an upper-middle class neighborhood of Madrid, the National Police official said.

The pregnant woman was just days away from giving birth.

The official said preliminary investigations indicated there was no relation between the 34-year-old man and the 36-year-old woman he killed. The official spoke on condition of anonymity in line with department policy.

Neither the man nor the woman were named and the motive for the attack was not immediately known. But the newspaper El Mundo said the man knelt before the altar of the church before he shot himself in the head and that he used to be the woman’s boyfriend.

The paper gave no source, and it was not clear if the child was his. El Mundo said the baby delivered in the emergency procedure was a boy.

It quoted witnesses as saying the shooting occurred as dozens of people were getting ready for the evening Mass and the parish priest was getting his gown on to conduct the service.

No other details on the attack were immediately available.

Blessed are the Peacemakers:

The context: “A Greek Orthodox Priest tries to stop a rioter from throwing a Molotov cocktail at Greek Police.”

Definitely my pic of the day too!

Right now, 40,000 feet overhead, a cosmic ray is sending a neutron smashing into a nitrogen atom, smacking a proton out of its nucleus and forming an isotope called carbon-14. Armed with the equation below, archaeologists use these atoms to pinpoint how old the Dead Sea Scrolls are, or the drawings in Chauvet Cave, or Ötzi the Iceman.

Living things constantly consume carbon—through photosynthesis, for plants, and for animals, ingestion of those plants. The atmospheric ratio of carbon-14 to regular carbon-12 remains consistent at one part per trillion, so if something is alive, one-trillionth of its carbon atoms will be C-14. But once a plant or animal dies, its carbon-14 is no longer replenished. C-14 is radioactive and unstable, with a half-life of 5,730 years, which means that half the atoms will turn back into nitrogen over that period. That rate of decay is key to gauging age.

Amount of carbon-14 detected in the sample

Amount of carbon-14 in the sample at the time of death, which would have been
a trillionth of the total carbon present

What we’re solving for: time elapsed since the thing—or the organic materials
used to make the thing—died

One of the Vatican’s most senior cardinals last night urged Catholics to support the ordinariate, saying it was a personal project of Pope Benedict XVI.

Cardinal William Levada, prefect of the Congregation for the Doctrine of the Faith (CDF), was speaking at a fundraising event sponsored by the Friends of the Ordinariate and The Catholic Herald.

During a short speech he said the ordinariate was viewed by the Vatican in a similar way to the Ambrosian Rite, a form of liturgy that is at least 1,200 years old, used by about five million Catholics mainly in Italy.

He said the ordinariate “is really his [the Pope’s] project”, and described it as a “important new structure in the Church”.

The cardinal said: “We all want to give the support of our prayers to the ordinariate. In these delicate times there is a need for financial support.”

Mgr Keith Newton, the leader of the Ordinariate of Our Lady of Walsingham, said the ordinariate was a “small and fragile plant”.

He said that £50,000 had been raised already through advertisements in The Catholic Herald. “In the long term we want to be self-financing,” he said. “We rely on people’s generosity.” Mgr Newton said in July that the annual running costs of the ordinariate would be £1 million.

The Personal Ordinariate of England and Wales was formally established by the CDF in January for Anglicans who wished to enter into full communion with Rome while retaining some of their Anglican patrimony.

The event was hosted by Archbishop Vincent Nichols of Westminster in the Throne Room at Archbishop’s House, Westminster…