A Newtown, Conn., priest had the “horrible” job of informing families this morning that their children had been killed in the elementary school massacre.

There were 20 children among the 27 people brutally killed the day Adam Lanza, 20, invaded Sandy Hook Elementary School and opened fire on staff and students. Lanza was also found dead in the school.

Most of the children were between the ages of 5 and 10, President Obama said on Friday.

Medical examiners have completed the grim work of identifying all of the victims at the school and families were informed early this morning that their loved ones had been killed.

“We were gathered until after midnight and we were sent out with teams to go to the homes of the victims,” parish priest Monsignor Robert Weiss told “Good Morning America” today. “We went to their homes early this morning to confirm the death of their children and it was just horrible.”

“The uncertainty…even though they knew in their hearts that this was real,”  he said. “And the questions they were asking, the regrets they had. ‘Why did I send my child to school today?'”

Weiss said some of the parents shared the last moments they had with their children. One dad said that, for some reason, his child got up early Friday morning and came down to tell the father how much she loved him. Another parent said their child had asked what dying was like just the day before.

“Parents are really going through a tremendous amount of pain and hurt right now, trying to deal with not just their personal loss, but what happened to their child in the last moments of their life,” he said.

A number of the victims’ families are part of Weiss’ parish. He baptized some of the children and some of them went to his parish’s nursery school.

“It’s hard to believe that these little children are gone,” he said.

Weiss met with the families from his parish who lost children and said the hurt and the anguish are “just settling in now” and then “there’s going to be anger.”

“And then they’re going to have to live with this reality that this big part of their life is gone for them,” he said. 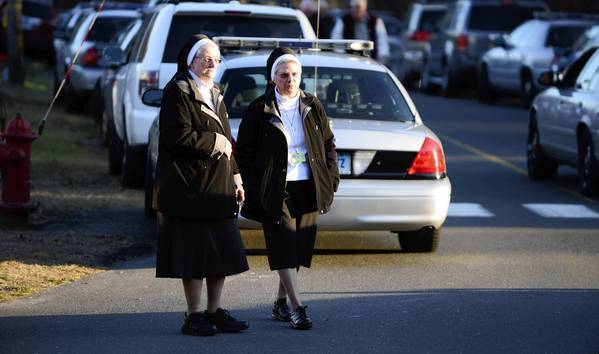 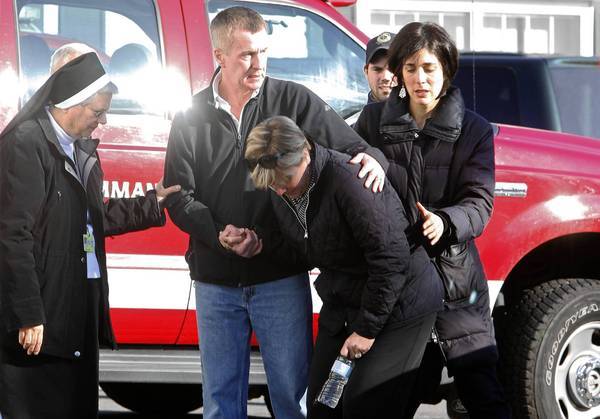 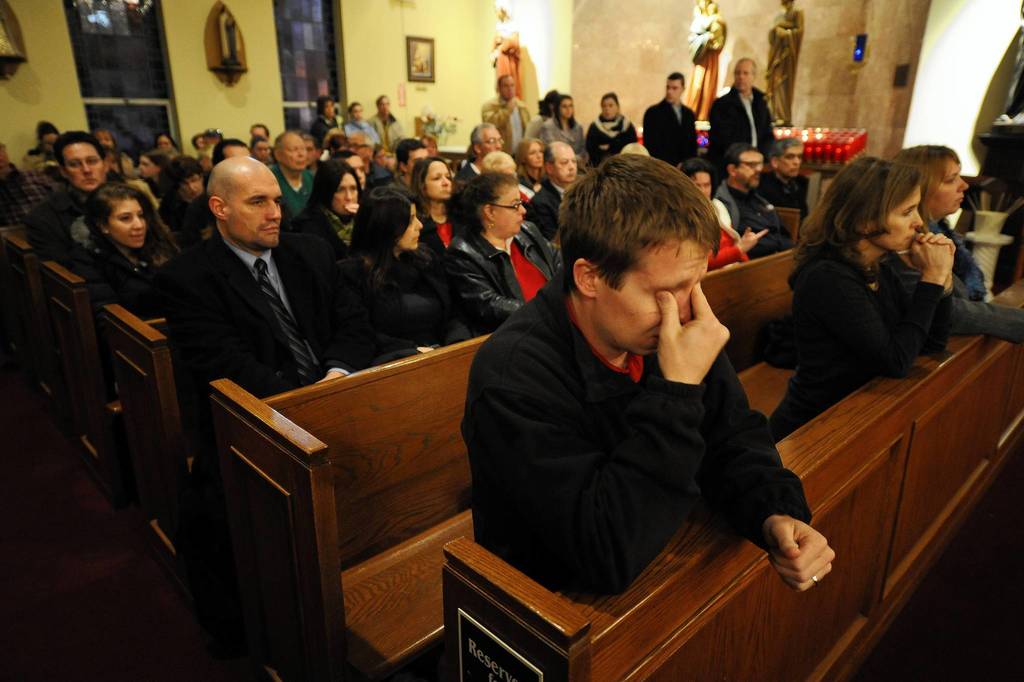 Mourners gather inside the St. Rose of Lima Roman Catholic Church at a vigil service for the shooting victims.  — Andrew Gombert, EFE, Dec. 14, 2012

From the Gnostic Gospel to the Dead Sea Scrolls. Dr Craig Evans:

An unusual story coming out of the United Kingdom features a man named Nathan Grindal, who only wanted to watch a darts competition. Grindal was among some 4500 other fans and spectators who were watching a match between Phil Taylor and Kim Huybrechts at the Cash Converters Players’ Championship being held at Butlin’s at Minehead, in Somerset.

Grindal, who sports long hair and a full beard, quickly became the center of the attention of an increasingly angry mob, who began chanting ‘Jesus.’ This alerted security staff to a potentially dangerous situation for Grindal.

Apparently, the crowd become concerned that Grindal’s likeness of what many artistic impressions show to be a representation of the central character in Christian Mythology would distract or otherwise upset the players.

SWNS reports that the Jesus chant morphed into a call for everyone to ‘stand up if you love Jesus,’ at which time Mr,. Grindal was ejected from the match by security staff, and brought to an area where he would be able to watch the match on television.

In an even stranger twist, after the match, Grindal was sought after by some individuals who sought to have their picture taken with him, and to have the pictures autographed.

The story reports Grindal commenting on the situation, stating,

“I didn’t go to the darts dressed as Jesus – I went as me. It was all very weird and distressing. I didn’t break down crying but I did get emotionally distraught. He also offered the commentary about how he was treated by security staff after his removal from the games, They were bullying me and picking on me, saying that I was someone else. “It would have been okay if the security hadn’t made a fuss getting me out of the arena. I was evicted for something I have no control over. I felt discriminated against.”

Several priests of the Catholic Diocese of Bridgeport responded quickly to the mass murder of adults and schoolchildren at a Newtown, Conn. elementary school, rushing to the scene to comfort victims and their relatives.

Brian Wallace, the diocese’s director of communications, said that priests from St. Rose of Lima Catholic Church, the only Catholic parish in Newtown, are actively responding.

“The parish is huge and extremely active and it’s just up the street,” Wallace told CNA Dec. 14.

“Within minutes (of the shooting) the pastor, Msgr. Bob Weiss, was at the scene of the tragedy working with families,” he said.

“He quickly alerted other priests from the parish who joined him. As this unfolded, and the significance of it became apparent, we also alerted all our clergy in the upper Danbury area.”

The shooting at Sandy Hook Elementary on the morning of Dec. 14 left at least 27 people dead, including 18 children.

A law enforcement official told the Associated Press that the attacker was a 20-year-old man with ties to the school. He apparently had two guns.

Wallace said the murders have had a deep impact. “We’re disoriented by it,” he said. “It is so profoundly disturbing.”

“It’s a very difficult time. I think it’s going to get worse. The indications are that there may be a number of children who were killed.”

CBS News reports that the gunman was the father of one of the students and is from New Jersey. A possible second shooter is in custody.

Wallace also noted that many Catholic clergy have responded, including those in local medical facilities.

“Our chaplains in the hospitals are meeting with people. Our priests are on the ground doing everything they can to deal with grieving families and with people who have good news but are totally traumatized by what has occurred.”

“We don’t know yet who the victims are,” Wallace said. “We assume that a number of victims may be parishioners or their relatives.”

Monsignor Jerald A. Doyle, administrator of the Bridgeport diocese, promised the prayers of Catholics in the diocese and shared their “collective sense of grief, shock, and loss.”

“We are all deeply saddened and shocked by this unthinkable tragedy, and our hearts go out to the entire Newtown community,” he said Dec. 14.

“Catholics throughout the Diocese are urged to join us in prayer for the victims and their families.”

Catholic Charities of Fairfield County has a trauma team with experience in counseling those in crisis. The team will be available to help victims in the local parish and Catholic school. The agency is open to the wider community but at present is focused on those most likely to be part of Catholic organizations.

“Our focus is dealing with any families that are members of the parish who will need counseling immediately,” Wallace said…

Israeli security guards at the Western Wall on Friday searched women worshippers arriving at the holiest place where Jews can pray for a seemingly inoffensive object – the Jewish prayer shawl, which under the Orthodox tradition can be worn only by men.

Once the shawls were found, dozens of women had to deposit them before proceeding to pray in the section reserved for women. A few, who managed to sneak the shawls in under their coats and wrapped them around their shoulders, were promptly evicted or detained.

Similar scenes have played out almost a dozen times every year since the group known as Women of the Wall was first established nearly 25 years ago.

Its members have endured arrests, heckling and legal battles in a struggle to attain what they consider their inalienable right – to pray and worship at the Western Wall like men do.

Under Israel’s predominantly Orthodox Jewish tradition, only men may wear a prayer shawl, a skullcap and phylacteries. Liberal Reform Judaism, marginal in Israel but the largest denomination in the United States, allows women to practice the same way as men do in Orthodox Judaism: they may be ordained as rabbis, read from the Torah, the Jewish holy book, and wear prayer shawls.

The multi-denominational Women of the Wall adheres to that liberal stream. Since 1988, its members have come to the holy site 11 times a year to pray on the first day of the new Jewish month, except on the New Year.

The police know they are coming and are on the lookout. The group’s members have been repeatedly detained, as soon as they are perceived to be offending Orthodox sensibilities – such as carrying a Torah scroll or if they try to drape themselves in the shawls. They are usually released after a few hours.

They have never been charged – evidence, the women say, that what they are doing is not illegal.

“We want to have the ability to pray out loud, to wear a prayer shawl, to read the Torah. And we want to do it without fear at the Western Wall,” said Anat Hoffman, the group’s chairwoman…

Rev. Nancy Talbot feels like one of the more blessed female clergy.

When the North Vancouver minister looks out on the pews on any given Sunday, she feels fortunate her small congregation is slowly growing and that at least men make up roughly three in 10 of those at worship.

The gender imbalance could be far worse. The minister at Mount Seymour United Church is painfully aware men have been quietly, but in huge numbers, streaming away from many of North America’s Christian churches.

“I don’t think many of us have answers to why it’s happening,” says Talbot, who has led Mount Seymour United for eight years while raising two boys in a same-sex relationship with her partner, Brenda.

Rev. Talbot remarks in the last paragraph that she has no idea why men are not coming to church. Nancy and Brenda have made it clear that men are redundant in their personal lives. Why would it be otherwise in the church?

At least homosexual men should feel at home in the United Church:

And, given the United Church began ordaining homosexuals in 1992, some of the denomination’s gay clergy expect that roughly half of the small cohort of remaining male ministers will be homosexual.