At the St Monica’s Cathedral Cairns (last week).  I was sent and asked to share a media link that covers the Ordination. There are pictures and you can listen to the service as well.

A mp3 of the service is here (to save, right click).

The transformative political events in the Middle East over the past two years have had, among many other unexpected outcomes, profound effects on the direction of research in Near Eastern archaeology.  War and civil unrest act as both a carrot and a stick, forcing the cessation of fieldwork in some areas, while promoting new investigations in places that might otherwise have gone unexplored. The geopolitics of the post-Arab Spring world are changing where we are able work, and by consequence they will shape the research questions we investigate, as well as the regions where future generations of scholars will likely specialize.  But the present moment of realignment is far from unique—our discipline has been shaped from the beginning by the tumultuous political history of the Middle East…

Worth a read over at The ASOR Blog.

Bishop Chandler Holder Jones reports on it on his BLOG. Not me. So I suppose that makes it okay to repost?!

The Consecration of the Very Reverend Owen Rhys Williams to Bishop Suffragan of the Diocese of the Northeast in the Anglican Church of America took place on the Feast of Saint Mark the Evangelist, Thursday, April 25th 2013 at Trinity Anglican Church Pro-Cathedral, Rochester, New Hampshire… 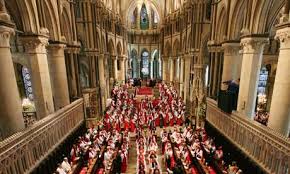 … The YouGov survey which Professor Linda Woodhead commissioned to inform the 2013 series of Westminster Faith Debates, and which BRIN has been reporting after each debate, is likely to prove a very valuable dataset for subsequent secondary analysis. To illustrate the point, Professor Woodhead, with statistical support from the Revd Professor Bernard Silverman, has used the poll (conducted online among 4,437 Britons aged 18 and over on 25-30 January 2013) to undertake a segmentation analysis of contemporary Anglicans (1,261 identified themselves as such in the survey). Her findings are presented in her article ‘”Nominals” are the Church’s Hidden Strength’ in the current issue (26 April 2013, p. 16) of the Church Times. This is only available online to subscribers of the newspaper.

The analysis proper, which forms the first part of the article, distinguishes four types of Anglicans:

Godfearing Churchgoers (5% of Anglicans) – These are Anglicans who attend church, are very certain in their belief in God, and who say that God is the main source of authority in their lives. They are also likely to score highly on other indicators of religiosity (such as prayer and Bible-reading) and to hold conservative views on many issues of personal morality, particularly sexuality (setting them apart with Baptists and Muslims rather than fellow Anglicans).

Non-Churchgoing Believers (50% of Anglicans) – These share a good many of the attributes of Mainstream Churchgoers, notwithstanding that they do not attend church. They all believe in God (although some prefer the word Spirit), and significant numbers practise religious or spiritual activities regularly. ‘These “nominals” are more than Anglican in name only: they believe, practise, and identify with Anglicanism.’

Non-Churchgoing Doubters (33% of Anglicans) – These Anglicans are also more than merely nominal. Only 15% are outright atheists, most being agnostic or unsure about God, and more than one-fifth claim to practise some religious or spiritual activity in private. They are the most morally permissive of the four groups.

The second half of the article is an impassioned – some may say occasionally idealized – plea for the Church of England to take more seriously non-churchgoing Anglicans in general, and Non-Churchgoing Believers in particular, rather than representing Godfearing Churchgoers as the ‘most real Anglicans’. Woodhead contends that the Church is in danger of becoming too clerical and congregationally-based, and of abandoning its sense of being a lay institution governed by monarch and Parliament, and responsible to the people.

The whole piece is here.