The Anglican Use of the Roman Rite: 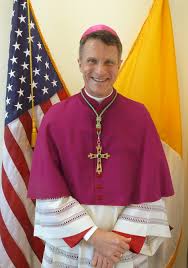 The Archdiocese for the Military Services (AMS) is celebrating the Catholic priestly ordinations on Saturday of two United States military chaplains and former Episcopal priests, both entering the Catholic priesthood through the Personal Ordinariate of the Chair of St. Peter, established by the Holy See in 2012 for former Anglican communities and clergy seeking to enter the Church.

In his homily at the ordination Mass for Father Vieira, Archbishop Broglio said the faithful expect the new priest to “ignite a blaze of new evangelization as he is ordained in the Year of Faith.”

“You will be empowered to nourish the community of faith with the most precious gift she has to offer, the Body and Blood of Christ. No one else can give it and so your contribution will be priceless. For the Army, the greatness of that gift is so appreciated, because it is in short supply. Every Catholic who has been deployed knows the value of what you and your brother priests alone can give. You will, to quote Karl Rahner, ‘lift the chalice with the blood that was redeemed and sanctified in the truth.’”

Father Vieira, a married father of two, holds a Master of Divinity from Golden Gate Baptist Theological Seminary in Mill Valley, California. He was ordained an Episcopal priest in December 1994 and entered Active Duty with the U.S. Army in July 1995.

Father Rojas, a married father of four, holds a Master of Divinity from Westminster Theological Seminary in Glenside, Pennsylvania. He has been a military chaplain for eight years.

“It is with great joy that I enter this next stage in my faith journey which has led me ever closer to the Throne of God, through the One, Holy, Catholic and Apostolic Church He established.  I have been convinced of the veracity of the Catholic Church for many years, but until recently I have been unable to act on that faith.  Through the grace of God and the beneficence of the Catholic Church I now have the privilege to serve God in the Church I love. I wish to express my deep gratitude to the Holy Father, Pope Francis; and to my family, for their trust and unwavering support.  I also want to thank each of the Military Catholic Communities which have nurtured me as one of their own for over thirteen years as I walked the line between the Catholic and Protestant churches. I have truly come home!”

“I am overjoyed to be in full communion with the Catholic Church.”

Prince Charles will make history on Sunday (Sept. 1) when he attends the installation of Chief Rabbi Ephraim Mirvis at a London synagogue.

It will be the first time a British royal has attended such a ceremony.

The heir to the throne will be among 1,400 guests at the synagogue that will include Jewish-born Ed Miliband, the leader of the opposition in the British Parliament, and Roman Catholic Archbishop of Westminster Vincent Nichols.

Jewish leaders from England and the Commonwealth will also attend.

Outgoing Chief Rabbi Lord Jonathan Sacks, 65, led the community for the last 22 years. His next role will be as a roving Jewish educator, visiting communities around the world to inspire new generations of Jewish leaders.

A report in The Jewish Chronicle said the new chief rabbi will focus on strengthening Jewish education, and “realizing fully our potential for social responsibility.”

“British Jewry has much to be proud of,” he said on the eve of his installation.

Born in South Africa in 1956, Mirvis is married with five children. He is a former chief rabbi to Ireland. He holds a bachelor’s degree in education and classical Hebrew from the University of South Africa and was ordained a rabbi at Machon Ariel in Jerusalem. He is also trained as a shochet or ritual slaughterer.

As the west, led by the US and prodded by France, rattles its saber at Bashar al-Assad, some in the Christian community are looking to the Bible to see what it might say about these events. They are turning to Isaiah 17:1-2 which is an oracle against Damascus.

See, Damascus will cease to be a city, and will become a heap of ruins.Her towns will be deserted forever; they will be places for flocks, which will lie down, and no one will make them afraid.

Some Christians, and apparently some Muslims too, see this as sign of the second coming of Jesus Christ.  But there are a couple of problems with this interpretation.

Over at the Deacon’s Bench:

Clergy are often relied upon to guide others through difficult times, but a new study has found that the very nature of their work could put them at greater risk of developing depression and anxiety themselves.

Researchers from the Clergy Health Initiative at Duke Divinity School interviewed over 1,700 United Methodist pastors by phone and through online surveys, and found that the instances of depression were 8.7 percent and 11.1 percent, respectively, compared to the average national rate of 5.5 percent.

“It’s concerning that such a high percentage of clergy may be depressed while they are trying to inspire congregations, lead communities and social change ventures, even just trying to do counseling of their own parishioners,” said Rae Jean Proeschold-Bell, the Clergy Health Initiative’s research director. “These are responsibilities that you would really want a mentally healthy person be engaged in, and yet it may be the challenges of those responsibilities that might be driving these high rates of depression.”

Other occupations that involve a strong focus on providing care for others, such as those in nursing and social work fields, have also been tied to above-average rates of depression.

According to Proeschold-Bell, several factors are at work that make clergy more vulnerable to depression and anxiety. For one thing, pastors feel they’ve been called to their work by God and can perceive the stakes of their job as higher than other occupations as a result.

“If I have a bad day doing research, I can go home and relax and start again tomorrow,” said Proeschold-Bell. “A clergy person goes home after a long and hard day and they are questioning themselves: ‘Did I take the right course of action? Did I do what God wanted me to do?’”

In any given week, clergy are also likely to experience many more emotional highs and lows than the average person.

“They’re literally holding the weddings and the funerals,” said Proeschold-Bell.

Armed with knives, clubs, and chains, a group of 30 Muslims attacked an Anglican cathedral in Nigeria, according to Morning Star News, a US-based website that reports on the persecution of Christians.

At least seven clergy and other church leaders were wounded in the attack, which took place in Nasarawa State in the central part of the nation.

“As they were terrorizing the church members, their fellow Muslim youths playing football at the field adjacent to the church jumped in through the fence and helped the gang,” said Rev. Isaac Onwusongaonye. “This gang beat the security men at the gate mercilessly with wood, chain and iron … I narrowly dodged a big stone thrown at me.”

The attack, which followed a dispute over payment of water at the church well, ended when police arrived.

Over at Ritmeyer Archaeological Design:

Our Image Library has been updated with many new drawings. There are two new series on Jerusalem, new reconstruction drawings in portrait orientation of the Tabernacle, the Temples of Solomon and Herod, also of Herodium and other sites.

Throughout its history, the size of Jerusalem expanded, but also diminished at times, as shown here:

Very well done. The images can be purchased from the store (or perhaps in some future updated ESV Study Bible?).