Dr. Amy Beam was kind enough to email me her report entitled, “The Kurdish Guides and the Noah’s Ark Discovery Fraud.”  Please have a look. It’s a first-hand accounting of certain individuals involved in the hoax.

And for those of you who will reflexively conclude that such exposure of the fraud is about insulting faith, it isn’t.  So please take a breath. From the concluding pages:

A Facebook group was started in September 2011 to investigate the NAMI/MEDIA discovery and demand an audit and accounting from the NAMI/MEDIA leadership. Many church leaders and members worldwide have posted reminders that religious belief is based on faith. It is not necessary to find Noah’s Ark as proof of one’s faith or morality.

There are several film-makers backed by TV stations making documentaries in 2012 of the search for Noah’s Ark and the hoax. Hopefully, some guides will speak publicly so that finally, all of the guides who were innocent victims in this fraud may be relieved of the burden of silence and secrecy.

It is a good report, so give it a read.

In April 2010, NAMI announced that they had discovered Noah’s Ark on Mount Ararat. They supported this claim by declaring that the date of the wood had been scientifically tested as originating in 2800 BC.

NAMI has never followed up its sensational announcement with data that can be analyzed by scholars. In particular, they have withheld results from Carbon 14 tests done on four samples of wood. Andrew A. Snelling, Director of Research for Answers in Genesis, was provided the test results in order to gain his support ahead of the 2010 announcement. He explained to them why the data did not support their identification of the alleged object as Noah’s Ark, but they ignored his analysis and presented their claim as factual.

Since NAMI continues to attempt to deceive the world, Snelling is now revealing the confidential data they provided. In his report posted online last week, he presents the four test results from the wood. Samples A, B, and C are all less than 700 years old. Sample D was dated by an anonymous lab to approximately 2800 BC and is the basis for NAMI’s claim that the wood comes from Noah’s Ark.

Snelling’s report is lengthy and detailed, but he points to several problems with the date of Sample D: (1) This sample was tested at only one laboratory, and a different one than the other samples. This does not squelch rumors that a laboratory fabricated results for a price. (2) The date of the death of the tree from which the wood came is between 9858-294 BC. That range is too broad to be useful, particularly with a single sample tested at a single laboratory. (3) The tests of dendrochronology on this sample are not reliable. (4) Comparison with samples of fossilized wood from trees killed in the Flood indicate that the date of Ark wood should be closer to 20,000 years BP.

In short, the burden of proof is on those who claim that they have discovered Noah’s Ark. Their unwillingness to report their data so that it can be analyzed by scholars suggests that they are perpetuating a fraud.

Previous posts on this blog about the NAMI discovery include:

Don’t bet on it! Anyway, here is the Huffington Post with the news:

Reports are cropping up that the fabled Ark of the Covenant, said to contain the remnants of the Ten Commandments, has been discovered along with the Tomb of Alexander the Great on the Greek island of Thasos.

The Focus Information Agency, a Bulgarian outfit not exactly renowned for accuracy, is reporting that Grekomania.ru, a Russian web portal that purports to be an “official information partner of the Ministry of Culture and Tourism of Greece,” has claimed that a group led by Nikolaos Kumardzis, an archeologist apparently unaffiliated with any other dig, has identified one of the world’s great treasures. At least one Armenian newspaper is running a similar story.

What more confirmation could anyone possibly want?

Thasos, which is near Macedonia, has long been rumored as the potential resting place of Alexander the Great, who died in Babylon in 323 BC after conquering Persia and consolidating Eurasian power. The connection between the great military leader and the ten commandments — none of which he could truly be said to have followed — is unclear, which makes the news that they were discovered together even less credible.

That being said, the Ark of the Covenant has inspired travelers and explorers for hundreds of years and is likely to continue to do so. It is worth remembering that pilgrimages remain part of the modern travel culture and that visiting relics or searching for them is quite popular in much of the world…

These sorts of purported sensational finds perpetually pop up in the news. Nothing new. Same old trash.

Robert Cornuke is well known in evangelical circles as a non-archaeologist with several astonishing archaeological discoveries. His latest video describes “possibly the Biblical find of this century!” He claims to have discovered the four anchors from Paul’s shipwrecked vessel off the coast of Malta.

Gordon Franz does us all a service by evaluating Cornuke’s presentation. He notes a series of minor mistakes, but he focuses on the four pillars of Cornuke’s case, concluding that:

1. Cornuke’s video misleads in claiming that only his location has the ocean depths as given in Act 27.

2. Cornuke’s video fails to inform viewers that there are other qualified bays that have a beach.

3. Cornuke’s greatest mistake is claiming that sailors would not have recognized the east coast of Malta.

4. Cornuke’s argument cannot account for the specifics of the shipwreck as described in Acts 27.

Franz’s article expands upon each of these points and addresses other problems with this sensationalized “discovery.”

Here is a great video that aims to explain why it is that the Jordan Lead Codices are to be considered fake:

For a background to these Codices, which came to light this year, click here, here, or here. 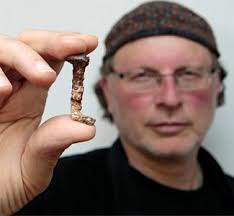 Remember Simcha Jacobovici and the whole nails of the cross of Christ pseudo-archaeology garble? Well, it seems that despite some great critique, he has decided to push on and defend his wild claims:

Simcha Jacobovici has written a 46 page defense of his “nails of the cross” discovery. Sad to say, his delivery mechanism was James Tabor’s blog. No doubt it will be filled with backtracking, denial, and otherwise hair-splitting parsing of what he “meant.” The person with casual interest will probably not even bother wading through it, allowing Simcha to say, “Hey, I responded in detail,” to the masses whose eyes will glaze over thinking he’s done due diligence. Those people will also never find or read the critiques of his defense that will surely follow.

Simcha, we already know why you went public with this and what you meant. You are an attention-seeker who needs to cash in so you can keep your film career going. It isn’t rocket science. Why not just ask James Cameron for some cash — maybe you can catch him when he’s not out bonding with cannibals.

Or, as Todd Bolen writes:

… That a moviemaker who makes millions would respond to bloggers with a 46-page document indicates just how much his reputation has been damaged by the criticism.

Tabor’s blog? Well that says it all!

James Tabor for those of you who don’t know is the man behind the Jesus Dynasty trash and the Lost Tomb of Jesus (more trash) which, by the way, was produced with Jacobovici and that with James Cameron.

Like crucifixion nails, Noah’s ark and the Jesus Tomb?

Every few years, it seems, a spectacular Bible-related archaeological claim catches media attention. Such claims dominate news websites for a few weeks and then tend to fade quickly from public attention, revealed as fakes—or at the very least shown to be less compelling than originally claimed. In recent years we’ve seen flurries of hype and interest over the Jesus tomb and Noah’s Ark. The latest claim—suspiciously timed for Easter—is by a journalist who claims to have (maybe) found the nails used to crucify Jesus.

You don’t have to read very far down that Time article to realize that this is less spectacular than the hype suggests; even the journalist making the claim admits that it’s a possibility, not a certainty. Not knowing anything more about this particular claim, I won’t comment on its merits, but this seems a good opportunity to talk about how to approach sensational claims like this.

It’s understandable that Bible readers and believers would be excited at the discovery of a possible artifact mentioned in the text of Scripture. (And by contrast, an atheist might be excited by an archaeological find that appears to contradict the Bible.) But how can we—most of us not archaeologists, and only dimly aware of the scholarship and context behind archaeological claims—evaluate these claims? Here are a few thoughts to consider…

They’re well worth remembering for the next time (which will be soon enough) a sensational archaeological claim hits the headlines.