I saw this on Steve Ray’s blog today:

Everyone knows the ancient Christian creeds are outdated and passé. It is time we have a new creed that fits everyone in our brave new modern world:

We believe that God is in all of us;
He has been created in our image

We believe that after death comes The Nothing;
Confirmed by the dead who say and do nothing.

We believe we should all get along and love one another
as long as there’s no inconvenience or discomfort.

We believe in the rejection of all creeds.

Read it in its entirety here.

I got to thinking about this… and the world is in a terrible state.  G.K. Chesterton wrote this classic back in 1912, and the question is still relevant and as applicable today as it was then.

The book can be downloaded (for free) and read here.

A new campaign, an initiative of the Bible Society, urges parents to read tales from the Old and New Testaments to their children.

The Telegraph has the details:

It might not feature boy wizards, magic wardrobes or Hobbits, but its epic cast list does include a giant, a talking snake and a man who lived for 969 years.

Now parents reading stories with their children are being urged to mix favourites such as Harry Potter or the Narnia books with tales from the Bible as part of a new campaign aimed at a million young people.

The initiative is timed to coincide with the release of a string of blockbuster Hollywood adaptations of stories from both the Old and New Testaments.

Organisers are hoping to introduce a new generation of British children to stories from the Bible with which their grandparents would have been instantly familiar.

They fear that ignorance or open hostility towards religion by some parents could lead to a generation of children growing up unaware of many of the stories which have formed a foundation of western art, literature and music.

The campaign also follows a series of studies suggesting that fewer and fewer parents are regularly reading stories to their children at all.

The campaign, an initiative of the Bible Society, aims not to promote religious teaching but simply to introduce a new generation of children to the drama and adventure contained in the Bible.

Research commissioned by the charity found that British adults who recognise themes and stories from the scriptures in modern films and music are in the minority.

The study, which will be published this month, also found that only just over a third of adults think that having an understanding of the Bible is an important part of young people’s education.

However, it found that where they are introduced, Biblical stories still carry a strong resonance with parents and children alike. Separate polling conducted for the campaign identified the nativity as the nation’s favourite Bible story for both children and adults, followed by Noah’s Ark and the life of Joseph.

But there was then a divide along gender lines. The story of David and the giant Goliath ranked fourth among boys, while for girls it was Adam and Eve, which featured the talking snake. The story of Methuselah – who lived to the age of 969 – did not feature.

The organisers of the “Pass It On” campaign are understood to be working on a new app for iPads and other tablet computers containing a selection of Bible stories designed to be read to or by young children.

They are also in talks with popular children’s authors to come up with their own exciting retellings of once familiar Biblical stories.

“Despite being the world’s all-time bestseller, the Bible today faces its greatest challenges in the UK for centuries,” said James Catford from the Bible Society.

“Its stories open the door to understanding much of our history, as well as our cultural and literary heritage. But many of us have never opened its pages and only a tiny minority read it regularly.”

The campaign hopes to capitalise on a string of Biblical blockbusters, including Ridley Scott’s Exodus starring Christian Bale as Moses, and Russell Crowe’s forthcoming appearance as Noah.

In the St Austin Review:

It is said quite truly that the path of least resistance leads to Hell. This truism is particularly relevant to our present hedonistic culture because hedonism is the path of least resistance. It is the belief that we should do whatever makes us feel good in the present moment. Such a belief is inimical to the Christian insistence on the necessity of self-sacrifice. Hedonism hates the cross. It hates all talk of sin, which it has banished from its vocabulary. It spurns all talk of virtue, believing that prudence, temperance and duty are all trumped by “freedom”, which is defined as the “right” to do what we like with our own lives.

The problem is that we cannot do what we like with our own lives without harming others. A woman’s right to choose to fornicate leads to the demand for her right to kill her own unborn children. This “right” to kill becomes more important than the children’s right to live. Hedonism demands human sacrifice, the offering of babies on the altar erected to the individual’s ego.

The fundamental error at the heart of hedonism is the very belief that our lives are our own. We do not own our lives. Our lives are given as a gift and will be taken from us whether we like it or not. The gift is not free. It comes at a price; a price that we have no choice but to pay.

The price of life is the cross. Everyone has their own cross to carry. The cross is the life that we’ve been given. Life and the cross are the same thing. They are inseparable. The only choice is not whether we have a cross but whether we choose to love it or hate it.

As with life, so with love also.

And here is the ironic paradox at the darkened heart of hedonism. If we will not sacrifice ourselves for others, we will sacrifice others for ourselves. And yet every time we nail others to the cross, we nail ourselves to it also. The more selfishly we live, the more miserable we are. Happiness is not found by indulging our lower appetites but in embracing the self-sacrificial cross of life and love.

The number of suicides is increasing. Despair is increasing. Nihilism is rampant. Addiction is an epidemic. These are all signs of a society that is crucifying itself through its hatred of the Cross.

Somewhere, they have been failed: 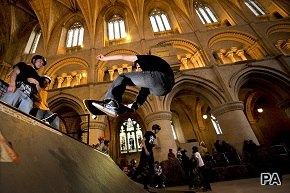 Religious figures have the least influence on the lives of young Britons – and more say religion is a force for evil than a force for good.

Our experiment of godless society has failed. We have tried to run our government by godless policies. We taught our children a godless worldview. Our biggest mistake was subjecting hundreds of millions of people to this failed experiment for so long, without recognizing or correcting its failures.

Worth a read in full in the Christian Post.